Home » Intriguing Details of the Largest Public PEOs in 2019

Because our first post was so well received, we decided to post annual updates. Below are my observations after pouring over the 10-Ks of the largest publicly-traded PEOs.

The below numbers, unless otherwise noted, are based on the 10-Ks with the following year-end dates:

WSE is one of the few metrics that almost all of the public PEOs provide (BBSI is the lone exclusion). With audited numbers for FY19 for ADP and Paychex, and unaudited quarterly earnings updates for TriNet and Insperity, below are the latest figures. 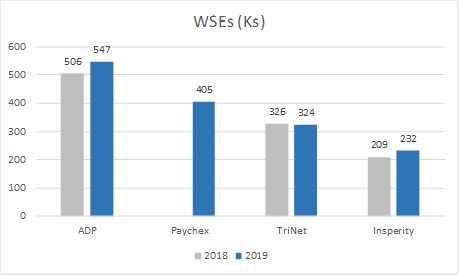 This appears consistent with the numbers provided in a recent industry article by McHenry Consulting, which also places BBSI in the 200K-300K range alongside Insperity.

Though rarely brimming with quantitative information, the risk factors section of the 10-K provides some of the most useful qualitative information about what concerns the company and what it may be doing to allay those concerns. I went through each company’s risk factor disclosures and grouped them into the following themes:

The below chart shows the distribution of risk themes for each PEO. For example, of all the risk factors disclosed by ADP, roughly 20% of them were related to Strategy as defined above. 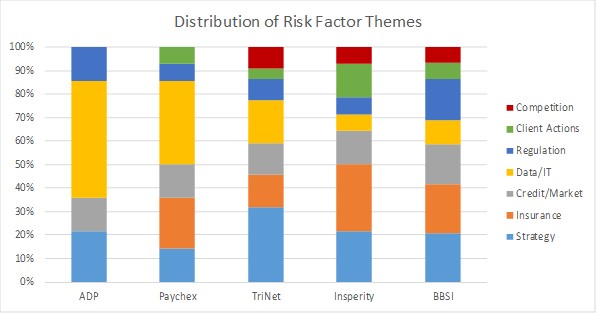 The above chart is well and good for conveying the distribution and proportions of a PEO’s risk disclosures, but it does not convey a very important perspective – the relative importance of each risk factor.

For example, if Company X has ten risk disclosures and #1 and #2 are Strategy while #9 and #10 are Competition, the above chart would display 20% for both Strategy and Competition. But the rankings of each risk disclosure should be reflected as well.

The below chart does just that, by essentially calculating a weighted average such that higher ranked risk factors are given more weight than lower ranked risk factors. Do note that this is my own methodology and utilized purely for illustrative purposes and to provide a different perspective. The below chart and the underlying calculations are not found in the 10-Ks, nor are they approved or provided by the PEOs. 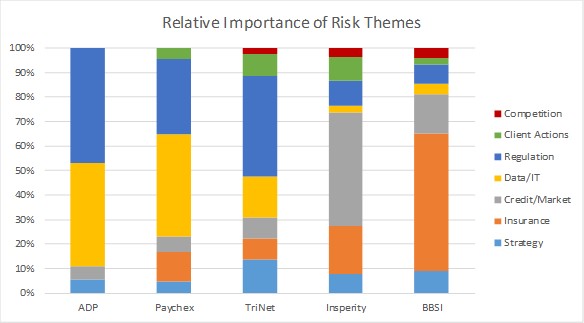 As noted above, ADP is the only one of the above companies to not disclose any insurance related concerns to its business. In contrast, it made up 55% of the risk factors disclosed by BBSI. Why is ADP relatively unconcerned and BBSI extremely concerned about insurance risk? The answer lies elsewhere in each company’s 10-K where they disclose details about the structure of their workers’ compensation (and health benefits) insurance programs.

According to their 10-Ks, each of the five companies utilizes a large deductible policy for its workers’ compensation liability[1]. ADP, TriNet, and Insperity all have $1M deductible limits. Paychex previously had a $1.3M limit in FY18 but moved to a $1.0 limit for FY19. BBSI has an eye-popping $5M limit. Combine BBSI’s $5M per occurrence limit with the fact that BBSI’s business is heavily concentrated in California[2], and it makes sense why BBSI would be relatively more concerned about insurance risk than its peers.

On the flip side, we still haven’t explained why ADP is less concerned about insurance risk. It has a $1M deductible just like Paychex, TriNet, and Insperity. The difference, as disclosed in its 10-K, is that ADP has reinsurance on its deductible layer. As far as this list of PEOs goes, ADP is the only PEO to reinsure its deductible layer. While there are no details in the 10-K regarding the reinsurance contract, the agreement presumably resolves ADP’s concern about insurance risk. This likely explains why ADP is less concerned with insurance risk than the other listed PEOs.

[1] ADP uses AIG, and Insperity and BBSI use Chubb. Paychex and TriNet do not disclose their carriers.

[2] California WC experience is known to be some of the more complex in the nation. Per the WCIRB State of the System Report: