Because people have more interesting ways to spend their time than to pour over financial statements, I have taken it upon myself to do just that. Below are some interesting observations after looking at annual reports from the largest publicly-traded PEOs.

Though rarely brimming with quantitative information, the risk factors section of the 10K provides some of the most useful qualitative information about what concerns the company and what it may be doing to allay those concerns. I went through each company’s risk factor disclosures and grouped them into the following themes:

The following chart compares how much each risk theme is a concern for these companies: 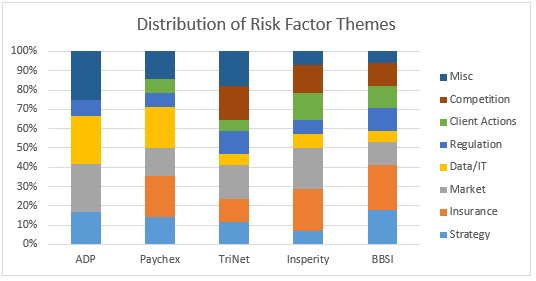 At a high level, it seems that risk profile can largely be separated by company size, as measured by worksite employees (WSE). Larger firms, like ADP and Paychex1, are relatively more concerned with how the market and their own handling of data privacy and cyber risk will affect their business. Smaller firms, like TriNet, Insperity, and BBSI, are relatively more concerned with how actions by their clients and competition will affect their business.

At a more detailed level, there are plenty of interesting observations:

Similarly, “strategy” is also a common concern for all the listed firms. And in the fine print, there are some interesting disclosures by some firms regarding changes in WSE figures and extraordinary expenses that were incurred.

As noted above, ADP is the only one of the above companies to not disclose any insurance related concerns to its business. In contrast, it made up 10-20% of the risk factors disclosed by the other companies, with most being in their top five risk factors and for BBSI being their #1 and #2 risk factors. Why is ADP relatively unconcerned and BBSI extremely concerned about insurance risk? The answer lies elsewhere in each company’s annual report where they disclose details about the structure of their workers’ compensation (and health benefits) insurance programs.

According to their annual reports, each of the five companies utilizes a large dollar deductible policy for its workers’ compensation liability2. ADP, TriNet, and Insperity all have $1M deductible limits, while Paychex has a $1.3M limit and BBSI has a mammoth $5M limit. Combine that $5M per occurrence limit with the fact that BBSI’s business is concentrated in California, and it makes sense why BBSI would be relatively more concerned about insurance risk than its peers.

On the flip side, we still haven’t explained why ADP is less concerned about insurance risk. It has a $1M deductible just like TriNet and Insperity. The difference, as disclosed in its annual statement, is that ADP has reinsurance on its deductible layer. The effective result is that substantially all workers’ compensation losses borne by ADP’s captive is ceded to a carrier. This explains why ADP is not as concerned with insurance risk as the other firms without reinsurance on their deductible layer.

It’s always interesting to me who companies list as a competitor:

Apparently, ADP, as the largest public PEO in the country by WSE figures, looks down from atop the mountain and sees no rivals. Paychex is feeling good, and likely more so post Oasis acquisition, and is only looking up to the top. The remaining three – TriNet, Insperity, and BBSI – see all the other public firms as threats.

[1] Even though Paychex’s disclosure is prior to its acquisition of Oasis, I am assuming it has more than TriNet’s 317K WSE and less than ADP’s roughly 500K WSE, if not before the acquisition then most likely after.

[2] ADP uses AIG, and Insperity and BBSI use Chubb. Paychex and TriNet do not disclose their carriers.