Over the past decade, the workers’ compensation (WC) industry experienced the quintessential highs and lows of a market cycle. The goal of this article is to share and discuss recent trends in both the WC and PEO WC space sand provide thoughts on the direction of the market over the next year. We will wrap up the article by sharing some ideas that PEO leadership and risk management professionals can consider to prepare themselves for the more challenging times that will inevitably come.

The broader WC industry has experienced some of its highest levels of profitability in recent history, especially compared to how the decade began. Calendar year (CY) 2010 saw the lowest net written premium (NWP) and highest combined ratio (CR) in the last nine years. Both metrics have steadily improved in the years that followed, leading to a projected CY 2018 NWP that increased almost 40 percent and a projected CY 2018 CR that is more than 30 points lower than 2010. NWP includes both National Council on Compensation Insurance (NCCI) states and state insurance funds such as California and Texas. Combined ratios are only for private carriers. This data is from NCCI’s 2019 State of the Line Presentation. See Figure 1.

Underlying frequency and severity trends for indemnity claims also continue the same trajectory since 2010, with severity increasing an average of 2 percent annually through 2018, but frequency driving the overall high-level favorable trends with an average annual decrease of almost 4 percent. See Figure 2. 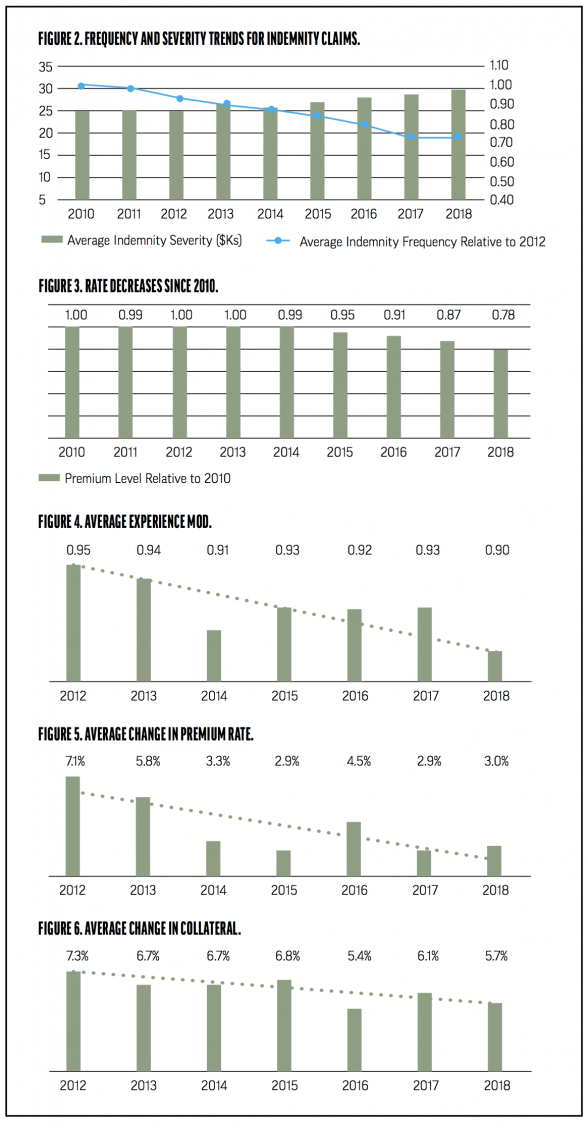 Just as the broader industry is growing in scale and profit, similar favorable trends can be seen in the PEO WC space, according to NAPEO’s 2019 Financial Ratio & Operating Statistics (FROS) survey. The average experience mod, average change in premium rate, and average change in required collateral all decreased over the past seven years. More specifically the FROS survey showed, from 2012 to 2018:

Despite the attractiveness of strong recent profitability, the percentage of PEOs on guaranteed cost plans has remained relatively flat across all members that participated in the FROS survey, as shown in Figure 7. 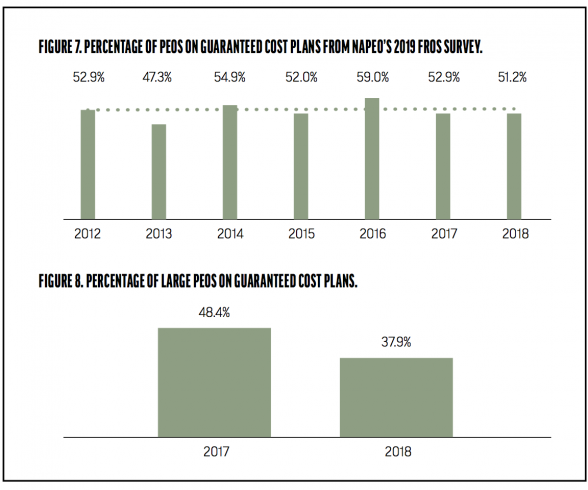 It is worth noting that the FROS survey reflects mostly PEOs with fewer than 5,000 worksite employees (WSEs). For PEOs with more than 5,000 WSEs, the percentage of PEOs using guaranteed cost plans has actually decreased by more than 10 percent.

While no one can predict how the macroeconomic winds will blow in 2020, conventional wisdom is that there isn’t an overwhelming number of indications pointing to a hardening market in the next 12 months. The main reason behind this expectation is that improvements in and greater adoption of technology have helped to lower indemnity claims frequency. As investment in technology is expected to continue in both the broader WC and PEO WC spaces, downward frequency trends are expected to continue, likely making for a favorable 2020 WC climate.

However, PEOs would be wise to prepare for future inclement weather. As a rising tide lifts all boats, when the tide recedes, it may reveal risk management shortcomings without adequate time to make necessary improvements.

What can PEOs do now to improve their WC programs? Examine the entire WC life cycle of prospects turned clients, and make sure there are no weak spots. More specifically, PEOs can:

All of these things can be accomplished with improved practices within the organization, and also by using talent and technology from outside your organization. In fact, the PEO industry could take a page from the insurance industry’s book and learn from its use of analytics to drive favorable trends.

While the above suggestions may seem like a big ask, especially for smaller PEOs, implementing even relatively simple risk management practices might benefit your firm greatly and potentially accelerate your firm’s progress towards the future.

The PEO WC space has mirrored the broader WC industry over the last decade, with a favorable environment expected to continue into 2020 for both. However, the PEO industry may want to proactively consider making improvements in their businesses before these trends begin to shift. PEOs that are prepared for the future will get there in far better condition than those that aren’t.